Fuji really outdid themselves with the S12-S Ltd., mainly when they named it. What does all that stand for? This particular S12-S actually came out of the factory as an 18-speed, negating the “12″ in the name, so there’s that. The Ltd. supposedly refers to the upgrade to Chromoly tubing. Sure. Good enough. But what about the S’s? One supposedly stands for “Special”, and the other. Uhh…

Regardless, they sure are nice bikes and older Fuji’s convert over to commuters or light tourers really well. This S12-S  is fresh from the work stand, now more functional and (hopefully) more stylish.

The new owner is full of pride; the insulated water bottle is full of hot Bengal Spice tea. 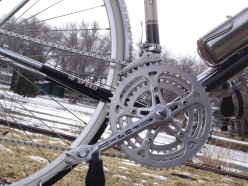