The sum total of knowledge I possess of pedicabs could easily fit on the head of a pin. I’ve ridden in a couple, mainly along the waterfront in San Francisco. I’ve never pedals one, and being more than a little agoraphobic, have never laid eyes on one outside the U.S.

It looks like I’ll be getting a crash course in them, as 4 are now here. Three are marked “White Horse” and are supposedly from Thailand. The last is a Neelam made in India. None are assembled so that’s where my education will begin. Along with the larger frame pieces are buckets and boxes and plastic tubs of smaller bits, many of which little resemble bike parts. Who knows, maybe I got the makings of some pedicabs filled in with old swing set parts.  Side note: When I was in my twenties I actually harbored visions of collecting swing sets.

Obviously this will be continuing story so check back if you’d like to see how this all goes.

Thanks to Robbie (shown) for hooking me up with his fine pedicabs. I’ll post the story of how he ended up with them in one of my updates. 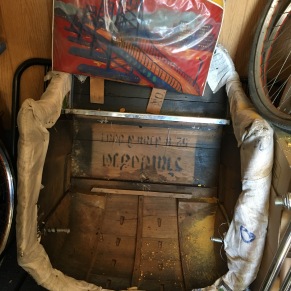 A wood seat and cushion

Check out that crazy artwork on the cushion

Wheels for the Indian pedicab

A White Horse frame, complete with horse, of course. 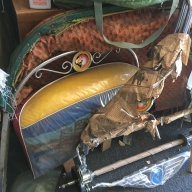 Strange covers which probably do something cool.

One of the White Horse pedicabs had never been assembled. Here is a box full of its parts.

Robbie, the previous owner, helping me load up the cabs.

A mermaid on the side of one of the seat buckets.