At first glance it looks European, possibly a Raleigh. It has a British-type fork with the little bowls on the ends of the crown. The seat stays also clamp at the seat binder, so overall, Raleigh looking.

Many bikes made in the Orient have some of the same characteristics of English-made ones though, so it could also be Chinese made. I don’t see any marking on the hubs, nor any Chinese lettering anywhere, but I’m not ruling anything out.

Things gets more confusing as it has some American parts, as well. There’s a Wilburn decal on the seat tube, but that looks to be the name of the shop where it was either sold or serviced.  The bike has 28″ rims with Wards Riverside single-tube tires, Torrington pedals, and a Delta Rolite generator and light, all American made. The pedals and the light could have been added, but those 28″ wheels and Monkey Wards tires look original to the bike. They befuddle me. I’m perfectly befuddled.

The bike previously belonged to Robert Edwin Worley, physics professor emeritus at UNR. “Sammy Schwinn”, as it was named, was the mate to “Suzy Schwinn”, Ed’s wife’s bike. Though Suzy may indeed have been a Schwinn, it’s pretty clear Sammy isn’t. Nevertheless, the erroneous surname can be forgiven since the word “Schwinn” was pretty much synonymous with “bicycle” back in the day.

Ed’s son David and daughter Kathleen generously donated the bike to our little museum in December. While getting some background on the bike and Ed himself, I mentioned that he must have been a rather tall man, but David noted that his father was only 5’8″. Amazingly, he regularly commuted on “Sammy”. If not a tall man, Ed was certainly a brave one. 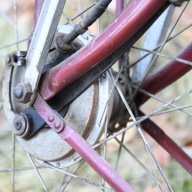 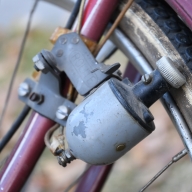 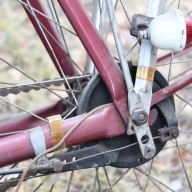 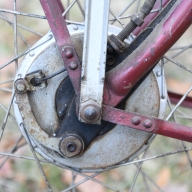 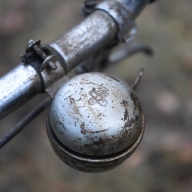 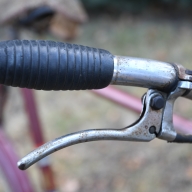 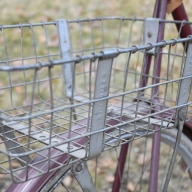 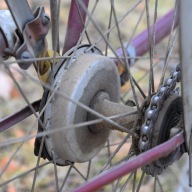