We all take breaks from riding. And when we do our trusty steeds sit there patiently gathering dust. If it sits long enough the bike will start to collect grime. We humans tend to like oil in everything from lawn mowers to shrimp scampis and some of that invariably becomes airborne, eventually to alite on “Ol’ Paint”. It can takes years, or you can throw one good Bagna Cauda party and the deed will be done in one evening.

Once everything is good and tacky, simply add pet hair, your hair, lint, another helping of dust in the form of bunnies, etc. and you’ll have what is known in Buzz Bomb nomenclature as a “Fuzzy Kitten”.

As “Kittens” go, this Della Santa is about as good an example as one could hope to find. Note the uniform coating of oily felt on all bits, the wisps of fluff draped from the spokes. It’s nothing short of feline art. Part of me wants to hose it down with Simple Green, while another part wants to hide it away and let it continue on its current path. In another couple decades it could be the bike equivalent of a purple bottle, aged into unexpected beauty. Since the bike has to be prepped for sale it will almost certainly get the hosing treatment, but you get my point.

By the by, the stamping on the bottom of this DS is “GL”, but no,  I don’t think Greg LeMond ever owned a Fuzzy Kitten, let alone a 61cm.

(Thanks to G. Lanstyak for allowing me to poke fun of his bike and my apologies if didn’t want me to.)

It’s good news when a bike doesn’t fit. To be clear, it’s good news only when it doesn’t fit you, but it does fit me, and obviously, at that point it’s only good news for me. Such is the case with this candy apple red Croll. My friend Noah originally bought it on CL for his girlfriend as the height (52cm) was just about right. At nearly 57cm, turns out the bike was more akin to a top-fuel dragster in the length department, not even close to right. For me, however, it was pretty much a custom fit, so here it sits. Hopefully I’ll even swing a leg over it from time to time (If only my riding habits matched the energy expended in such acquisitions).

From what I’ve gleaned, later Crolls were decent enough quality, but the early ones were fantastic as they were handbuilt by Walter himself. The Croll name was eventually sold, and as so often happens, when the namesake isn’t involved the product suffers.

I’m guessing this bike was commissioned in the early 1990’s based on the Shimano tri-color component group if nothing else. Also, the paint is as brilliant a red as I’ve ever seen and Walter’s bikes were known for their paint jobs. When you get this bike out under the sun it looks like it is plugged into an outlet. The old saying that the photos don’t do it justice is more than applicable here. 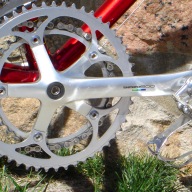 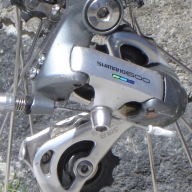 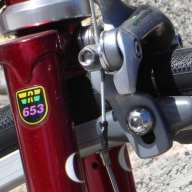 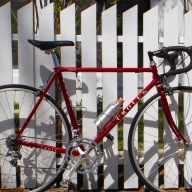