Schwinns could be badged and sold under a host of different names. Everyone from big department stores to little bike shops could contract with Schwinn to put their name on the bikes. One of my favorites is Haack’s, a little shop out of Madison, Wi. Their badge had  a top-hatted little character named, “Mr. Bicycle” prominently positioned on the head badge. To make it clear who he’s working for, his body spells out the shop name. Fantastic.

From what I’ve seen, other Haack’s badges don’t feature him, which is why I like this particular one so much. …And with a name like “Mr. Bicycle”, you can bet he knew his stuff, even if it looked like he hadn’t been on a bike in a while.

This particular Schwinn also has the “Hat in the Ring” graphics on the seat tube. Not sure if this was a nod to Eddie Rickenbacker’s Flying Circus or not; nevertheless, I put a little Schylling monoplane on the handlebars in case any Pfalzs or Fokkers cross my path. 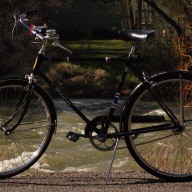