The Swiss answer to the tank

…Or the horse. You choose. At more than 50 pounds, armor does come to mind, though.

The Swiss, ingenius folk that they are, figured out a long time ago that a bicycle could drastically increase the mobility of their troops. Where a foot soldier can walk 20-25 miles a day, a pedaling soldier can cover double that or more. Thus the Militarvelo was born. The idea must have had some credence since one or another version of the MO-05 was produced from 1905 to 1989 (this particular one was made in 1943).

Riding a Militarvelo is reminiscent of the old British rod brake bikes, though the quality is noticeably better and the bike fits better. That likely has something to do with the smaller 26″ wheels as opposed to the DL-1’s 28 inchers. As heavy as the bike is, it doesn’t feel lethargic of loafy. On a slight downhill there is a feeling of, dare I say, efficiency, as it glides quietly along, out-coasting most anything on the road. That might have something to do with shear weight and momentum but I contribute it to the bike’s Swiss bearings which I swear feel smoother and more precise than the Brit or American equivalents.

Like a Swiss Army knife, the bike is loaded with extra goodies, all which all stock. There is a front-wheel dynamo, head and tail light, frame pump, rear carrier, and three different storage areas (a canvas handlebar bag and a leather frame case and leather wedge bag behind the seat tube which holds a set of 4 bicycle-specific tools). There’s also a bell, a wheel lock, and leather saddle and mudflap. A set of riding googles were hanging from the canvas bag when I got the bike. I don’t know whether they’re original issue or not, but I do like the look of them and think they’re period correct so there they stay.

Maybe my favorite part of riding the Militarvelo is choosing how to stop; there’s a spoon brake that pushes down on the front tire, a rear coaster brake, and also a rear drum brake. I’ve been thoroughly enjoying myself trying different variants of the three to see which I like the best. The only sure conclusion I’ve come to is, when going down a steep hill the answer is always, “all three.” 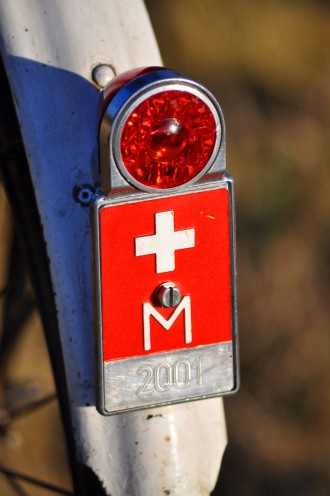 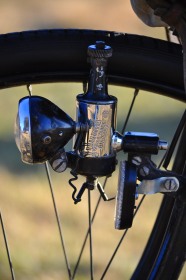 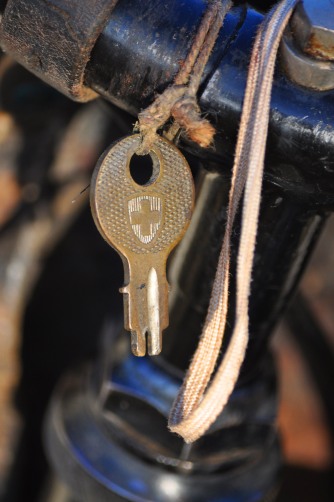 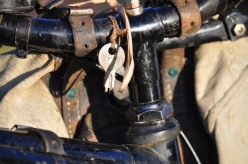 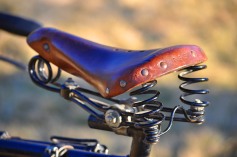 2 Comments on “The Swiss answer to the tank”