Witcomb U.S.A.- A framebuilder’s who’s who

This Witcomb was purchased from its original owner in Colorado and shipped here a couple weeks ago. The bike had a mix of components on it, everything from Campagnolo to Suntour to early Dura-Ace. I’m guessing the combination was largely done to extend the gear ratio, probably not a bad idea since Colorado is known to be a bit hilly. The eventual goal for the bike, beyond overhauling and giving it a good detailing, is to remove any non-Campagnolo bits and get it flying under one component flag.

When it arrived I admit I didn’t know much about Witcombs. I knew the U.S. versions were built in Connecticut, but that was only because it said so on the head decal. I had no idea there were American and English Witcombs, nor did I know that the frames themselves had a storied past. To me it was just a nicely made road bike that was still in great condition.

Roland was the one who eventually clued me in. It seems that more than a few reknowned framebuilders cut their teeth at Witcomb USA; Richard Sachs, J.P. Weigle, Chris Chance and Ben Serotta all put in time there. Each has subsequently gone on to carve out a name for himself. Like, a really big name for himself. I admit I was a bit star-struck when I found that out.

I have no idea which person actually built this Witcomb, or if was any of the builders listed. I don’t even know who was and wasn’t working for the company in 1976, the year the owner claimed to have ordered the bike. Maybe more information will come down the road. For now, it’s enough to know that it’s part of a bigger story. 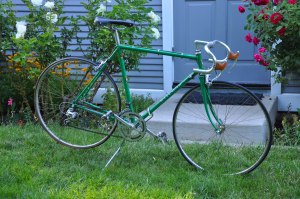 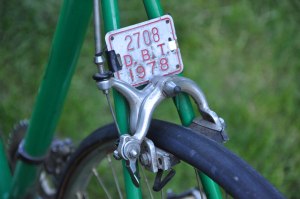 Some bike folk remember all the little details. For example, they can wax on about why a particular Schwinn is a 1938 and not a ’39. Me? I’m lucky to get within a couple years either way. I hear the differences but over time they just slip away.

I guess it doesn’t help that strange, new bikes are always showing up. Take this Adler which I’m sure to mis-remember here soon. Brief research turned up evidence that Adler was quite the manufacturer in Germany, making everything from motorcycles to Zeppelin engines. …And bikes, of course.

I don’t remember seeing an Adler before, and I think I would have remembered based on the unique accessories they have. Take the locking mechanism on the rear hub brake arm, for instance. Or the knurled knob on the headlug; a lockout for the headset, perhaps?

The Bosch lighting system still works and the original Continental tires hold air. With its heavy tubing and looong chainstays it’s never going to win any races, but it rides more efficiently than most prewar American bikes, since the Germans only hung accessories that added to the practicality and versatility of the bike (no tanks here). 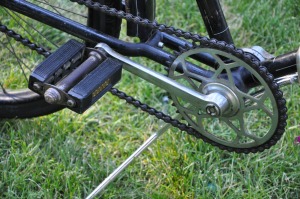 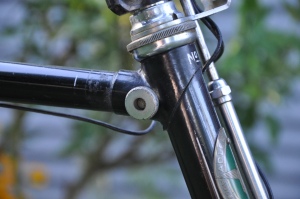 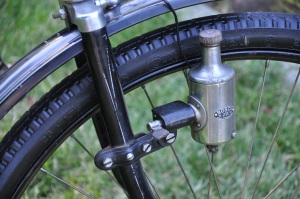 I’ve worked on tons of balloon-tire bikes and my fair of Schwinns in particular, but this is the first Whizzer I’ve ever tackled. Thankfully the engine reputedly runs so I don’t have to mess with any of that (the specific workings of the combustion engine elude me). Instead, I’m left figuring out a better way to attach the rear carrier, getting a crank that clears the engine and overall giving the bike a good overhauling.

After all that I might even try to ride it before I hand it back over to its owner. I hear Whizzers can move along at a decent clip so I’m looking forward to seeing what this old gal has in store for me.” 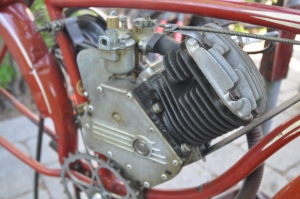 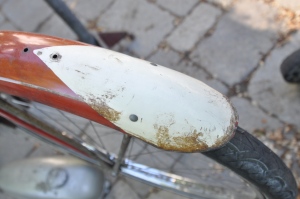 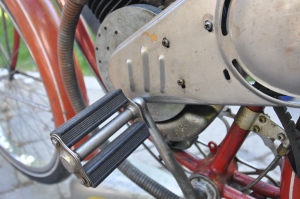