Here’s a good match for the girl’s Raleigh we posted a while ago (it was even made in 1960, the same year.)

This great old burgundy steed arrived from Arizona a couple weeks ago. It creaks and groans and does everything a good ol’ Raleigh should. 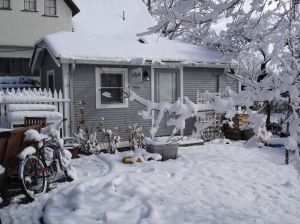 The Wheelhouse gets a fresh coat

It’s hard to justify digging out one of the old balloon-tires and taking it for a ride in March.

Ahh, spring in Nevada, where literally every day is a new experience.

Soon enough we’ll be able to post photos of a bike actually getting ridden.

I decided to jump into the Raleigh right away, more than anything else just to show that projects do get done around here.

The worst part of the refurb was buffing out the paint. Something about Raleigh black paint makes it very prone to oxidation. It took 5 rounds of buffing and nearly 4 hours, but under all the powder was shiny black paint. Most of the gold striping went the way of the dodo, despite my attempts to save it by taping it off.

In the end there is no good financial reason to spend nearly 8 hours on a plain Jane 3-speed (I ended up taking the bike down to a frame and then back up again).  I don’t regret the time spent, thought. Chalk it up to “preservation” rather than “profit”.

Hopefully I’ll be able to find a new owner who will appreciate this great little Raleigh.

Lewis and I just got back from the worst estate sale I’d ever been to. The little house was filthy beyond belief and cigarette smoke hung in the air like mustard gas (not only were there ash burns on the carpets, furniture and counters, there was even one on a globe. How do you burn a globe?) There was absolutely nothing worth paying a buck for in the house, and I mean nothing. To complete the less-than-enchanting experience, the little white mongrel that belonged to the place kept nipping at Lewis and I. The beast had a taste for our calves.

There was a wonderful 1960 Raleigh 3-speed hanging in the garage, though. Black with gold pinstriping, Brooks saddle, and generator, all intact. Not a balloon-tire bike mind you, but one worth saving nevertheless.

It is thus back here at the shop and will get a refurb someday soon. Hopefully by late spring. After that, I’ll find it a good home. That is, unless Fluff claims it.

A Few Years Back…

That would be 2006. The year we rolled bikes into the Nevada Museum of Art for their museum debut. It’s been a tradition for 4 years now and it looks like we’ve been invited back again. Rather than the long, three-week shows of the past, the new ones are one-nighters (all the work, with less “storage” time. Rats!).

Stay tuned for more info on the next Buzz Bomb show, coming August 2011. 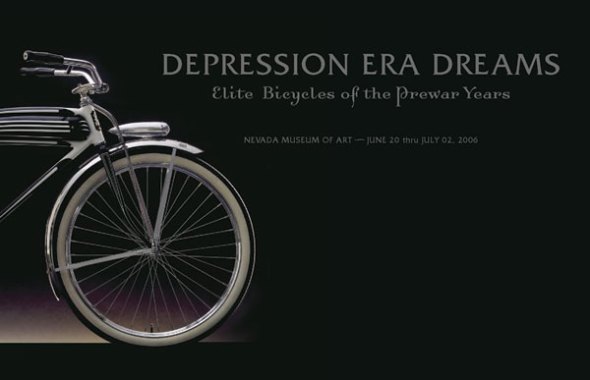